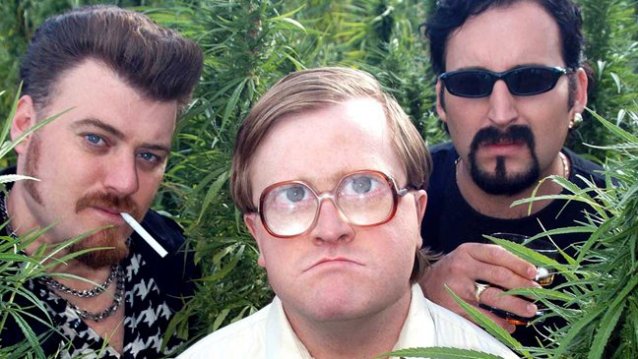 That’s right media lovers, the boys are back in town! The Canadian mocumentary cult classic, Trailer Park Boys, will be returning to Netflix with two all new seasons in the works. For those of you with your collective heads in the sand, let me catch you up:

Trailer Park Boys is a mocumentary-style sitcom created and directed by Mike Clattenburg. It follows the residents of the fictional “Sunnyvale Trailer Park” in Dartmouth, Nova Scotia (many of whom are ex-convicts), mainly Ricky (Robb Wells) who, after learning from a fortune teller that he’s going to die soon, decides to document his life so as to ward people off from a life of crime/drugs/alcohol. With him is his good friend Julian (John Paul Tremblay) and breakout character Bubbles (Mike Smith). The series premiered on Showcase television network in 2001 and the final season aired in 2007, followed by Trailer Park Boys: The Movie (2006) and Countdown to Liquor Day (2009).

Since the end of the show, the boys have made several appearances in character or as homages to their alter-egos, including 2009’s “Ricky, Julian and Bubbles Community Service Variety Show” tour, 2010’s “MashUp Piece Theater: The Wire/Trailer Park Boys” on Funny or Die and a 2012 guest appearance on the FX animated series Archer episode “The Limited”. With all of these appearances, it was hard not to wish the boys would make a return to the trailer park life in some way soon.

That wish was granted May 2012 with the announcement of Don’t Legalize It (Released in Canada April 18, 2014 to coincide with 4/20 celebrations), the 3rd TPB film. Also they announced that Wells, Tremblay and Smith acquired the rights to the series from producers (Mike Clattenburg, Barrie Dunn and Mike Volpe) and planned to release a new season of episodes on their own internet channel Swearnet.com. Don’t worry, there weren’t any bad feelings between stars and creator, Clattenburg, “While the three of us have moved on to different TV and film projects, the Boys are the only ones with the intimate knowledge and love of the show to keep Trailer Park Boys alive and well.”

It worked out better than expected, as a recent deal resulted in season 8’s 10 all new episodes and plans for a 9th season premiering on Netflix later this year as part of their Netflix Originals. Also the original series will now be available for the first time in the UK, Ireland, Netherlands, the Nordics and Latin America. As Ricky would say, this deal can “get 2 birds stoned at once”, by both introducing the series to new fans worldwide and bringing brand new content to those who already love Bubbles and his cats. “There’s no trio quite like Julian, Ricky and Bubbles and we’re thrilled to be the new home for these beloved hellraisers, our US and Canadian members love Trailer Park Boys and we’re excited to take their unique brand of humor to our markets throughout the Americas and Europe” says Sean Carey, vice president of Netflix.

Even more to be excited about: the company will also release three new standalone specials: “Community Service Special”, “Swearnet Special” and “Trailer Park Boys Xmas Special” The boys, ever playing the part, haven’t been the most enthusiastic about these new developments. “Julian’s pretty happy about it. We’re not as happy,” said Wells at a promotional stop for Don’t Legalize It. “I think it was just Julian saying, ‘I’ve got so many black T-shirts and I worked out really good, I think the cameras should come back.”

No word on exactly when the new episodes will premere, but as soon as I know I will pass it along. For now, here’s a sneak peek!

Your Guide to TV, music. movies and more