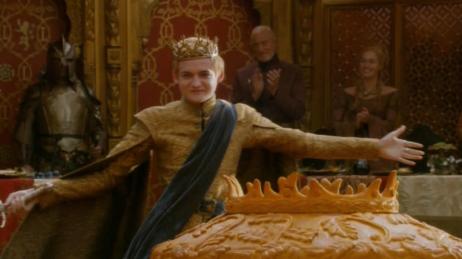 It’s Joffrey Baratheon’s wedding, but Cercei Lannister is NOT having a good day.

(Please be advised that The Media Chick has only seen episodes of Game of Thrones and has not read the book series for which the show is based. This review is free of book spoilers and will refer only to the events of the current TV show plot.)

When the Red Wedding took place at the end of last season, it came as quite a shock. I, and many other viewers had been lead to believe that the show’s central conflict was that between the arguable protagonists,  the Starks in the North and House Lannister, currently occupying King’s Landing. By wiping out most of the contending players from the Stark family and at least temporarially ending the War of the Five Kings, we were left wondering what could possibly take that conflict’s place. (Well, at least until Danaerys marches in with her army and dragons, annihilating everything in their path) But that’s one of the great things about Game of Thrones. No matter how much you think you have figured out, it only takes a second for everything to be turned on its head. From the moment Ned Stark’s head was swiftly seperated from his body in season one, this show has been able to reinvent itself over and over again. Tonight was no exception.

A theme I noticed tonight is that of identity crisis. Nearly every major character seemed to be going through some sort of internal struggle. Who is the kingslayer without his fighting hand? Can Cercei give up her power to the new queen? Can Ramsey overcome the circumstances of his birth and truly be a Bolton? Is Theon even still a person? The scenes with Theon, Ramsey Snow and his father especially drive this point home. His father is so disapointed with Ramsey for harming Theon that he tries to take any delusion that he’s a true son away from him. Pretty much the only hope Ramsey has of getting back in his father’s good graces is for the (non)Bolton son can try to kill the (non)Stark son and find Bran and Rikkon. I’m looking forward to watching the two “Snows” go head to head.

The episode began with the unlikely dining companions, Tyrion and Jamie. Now that Jamie is down to one hand, the brothers have never been on more equal footing. It’s almost as though they are equals throughout this scene, and I have to admit…I like this new humbled version of Jamie, even if Cercei doesn’t.

Joffrey, Joffrey, Joffrey…we knew it had to end sometime. He was just too much of a sadistic chicken to remain seated on the iron throne, but he also was the character everyone loves to hate. There was absolutely no chance of redemption for the character either. It was even more unsettling to watch him try to act civilized during the gift presentation before his wedding than when he acts like his old self. He almost seemed to actually appreciate Tyrion’s gift of a book. There was the briefest of moments, when Margery announces that the leftovers will feed the poor, where I actually thought that the marriage could have had a positive effect on Joffrey but just like his fake-nice act it didn’t last long. With the announcement of “There’s been too much amusement here today” suddenly it’s midget theater! If I get a chance to rewatch before next week it might be fun to do a count of all the people in attendance that this “show” is meant to offend. And despite everyone’s best efforts to keep up this illusion of “peace” in Westeros, (“Look! The Pie!” Very nice effort, Margery. Its a shame that most of those doves of peace are sliced in half.) Joffrey just can’t help himself from subjecting his uncle to more public humiliation. There probably aren’t many people left in the kingdom who doubt that Joffrey deserved to die, but Cercei is damn sure going to make sure someone pays.

-Breaking up is hard to do , Shae. Let’s just hope you’re on a boat and sailing away. Although something tells me that a very unhappy ending is in store for these starcrossed lovers. Moulin Rouge anyone?

-It’s ironic that the witch is burning people at the stake. Also, Stannis’ story is probably the strangest and the one I care the least about.

Your Guide to TV, music. movies and more